Skip to content
When I was originally drafting this blog, I was going to put a lot of emotion into it. I wanted to show my readers that climbing spikes are harmful to trees, and that no tree guy should use them when pruning a tree. Instead of taking that approach I decided to write down the facts about tree spikes. Then after you hear the facts, you can develop your own opinion.

The layers of a tree 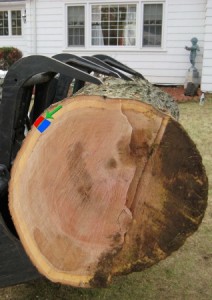 The photo to the right is that of a cross section of a Red Oak tree. I have highlighted three area’s of the growth rings.

The small GREEN area is the cambium. In the ISA Arborists’ Certification Study Guide cambium is defined as; the layer of meristematic cells that give rise (outward) to the phloem and (inward) the the xylem, increasing stem and root diameter.That simply means that the cambium is responsible for outward, or lateral growth of the tree.
Finally the BLUE layer is the xylem. Xylem is the main water-and mineral-conducting (unidirectional, up only) tissue in trees and other plants. Provides structural support. Arises (inward) from the cambium and becomes wood after lignifying. That definition also comes from the ISA Arborists’ Certification Study Guide.
The area to the inside of the three area’s labeled is called the heartwood and consists of old xylem. This old xylem is mostly dead/non-functioning tissue that has hardened off and is used for structure and support. A tree can continue to grow with the heartwood missing. For proof of that claim just view the pictures below.

What are spikes and what do they do?

Tree spikes, climbing spurs, and tree gaffs, are all common names that identify the tool shown below. They are attached to the outside of a workers boots via velcro straps and/or belt straps. They were originally developed as a climbing aid to help climbers get a proper foothold on a pole or tree with no limbs. They play a critical role in tree work and without them some jobs would be impossible.
Tree spikes are a very simple and effective design. They work by stabbing into the wood on an angle and giving the climber a place to stand.

One of the biggest problems that is overlooked with tree spikes is that they transmit disease. If a climber is wearing tree spikes when removing a tree, there is no reason why it would have a negative impact. The spikes are damaging a tree that is no longer going to be effecting the landscape. On the other hand, if your pruning a tree with spikes on the climber could kill the tree by infecting it with a deadly disease. The pictures below show a cut that I made on a Tulip tree (Liriodendron tulipifera). I removed this tree because it was getting a lot of dead wood in the tree, and it was way too close to the house. During the removal I noticed a lot of spike marks that were stained black, so I asked the homeowner a few questions. When I was done speaking with her I learned that another tree company pruned this tree about a year and a half ago. I knew the company, and also knew that they do not climb trees without the aid tree spikes. When the removal was finished I cut out a section to show the homeowner that the previous company killed this tree by giving it Verticillium wilt.

How did that happen? The answer is very simple. The company used tree spikes on a tree that had Verticillium wilt. Not knowing about the disease, or just being negligent, they used the same spikes to climb the Tulip tree in question. When they went up the tree, every penetration the spikes made injected the disease into the tree’s conducting tissue. My big concern is, how many other trees have they climbed with the same set of spikes. They could be spreading Verticillium wilt to hundreds of trees.
Tree Spikes, Climbing Spurs, Tree Gafs: Just the Facts.