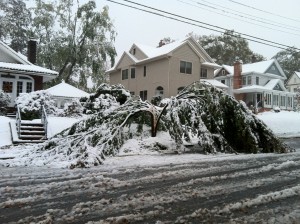 Last October northern New Jersey was devastated by a freak snow storm. It dumped about a foot of snow on trees in full leaf. It was a recipe for disaster. Tree limbs broke and fell everywhere. In fact, it’s over six months later and I’m still cleaning up from this storm that has been nicknamed “Snowtober”. Many homeowners have developed a fear towards trees. People have become so scarred, that I’ve heard rumors of neighbors suing each other because they feel every tree is now a hazard. So when does a tree become a hazard?
In order for a tree to be classified as a hazard it has to have two things.
1. A target: A target can be one of two things. A stationary target is a house, high value ornamental tree, pool, shed, telephone pole, high tension wire, ect. A frequency target is a roadway, pathway, or field that attracts foot traffic or vehicle traffic. The higher the volume of traffic, the higher the frequency.
2. A potential to fail: To say it bluntly, no tree is 100% risk free. All trees have a potential to fail. When a tree has a crack, hole, or rotted spot, the potential of a tree to fail goes up. 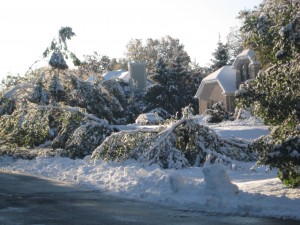 An arborist’s role in hazard tree ID is to mitigate, and get the risk to a threshold that’s comfortable for both him, and the homeowner. There is a fine line in mitigation, and good judgement must be used when assessing a potential problem….I’m not going to go into a complete blog on hazard tree ID, but I do want to give a brief explanation so we have something to go on….I’ll get to my point….
Homeowner after homeowner has come up to me and said, “My trees are too dangerous! Cut them all down!”. At first I thought they were kidding, but after six months of hearing the same question I now believe they are serious. To answer their question I need to go on the record and say what I have told all of them.

Don’t use the October snow storm as a medium. There has never been a storm like that in recorded history!

So why did the trees fail? The answer is quite simple really. The added weight of the snow on leaf covered trees was too much to the wood to hold. A mature oak tree can have upwards of 200,000 leaves on it, and those leaves could weight in excess of 3,600 pounds. A cubic foot of snow could weight anywhere between 5.2 lbs. – 12.5 lbs. depending on the density of the snow. The added snow on the tree more then doubled the weight on the branches causing them to crack.
My intention of writing this is to try and ease you mind. Trees are strong and can survive through hundreds of years of storms, floods, and droughts. If you have a tree close to your house it couldn’t hurt to maintain it. Pruning out dead limbs and applying a tree support system can greatly reduce the tree’s potential to fail.

Are your Tree’s Safe After “Snowtober”?